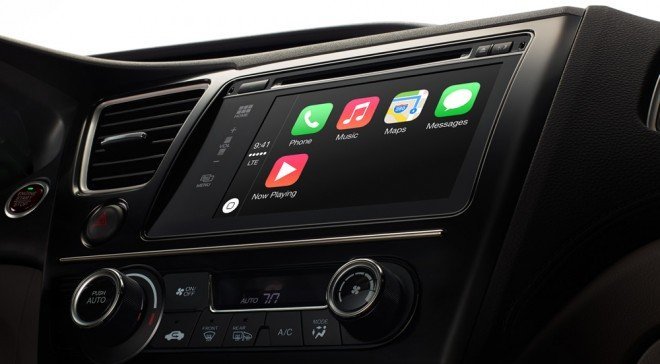 How Apple’s CarPlay Compares to the Competition

Apple may have finally rectified the disconnect between our cars and our smartphones — if only for iPhone users — with the introduction of CarPlay. It turns that archaic screen on your dash into a car-friendly iOS device, with Maps, Messaging, Music and more.

By taking control of your car’s screen, Apple is providing access to all the best features of iOS, controlled by voice and, depending on your car, the touchscreen or control knob. The user interface will be familiar to iOS users, with reworked versions of Maps, Podcasts, Messaging, and Music developed for the car’s screen. And Ferrari, Honda, Hyundai, Jaguar, Mercedes-Benz, and Volvo will be the first to launch CarPlay-equipped vehicles this year, with BMW, Chevy, Ford, Kia, Subaru, Toyota, and more coming later.

Apple has already forged partnerships with a handful of automakers for its Siri Eyes Free system, but that integration never took off. Now, by ceding control to Apple, automakers don’t have to hassle with updating their aging and perpetually outdated infotainment systems to bring you the core features and apps you use every day. And with each new iOS release, the functionality is bound to grow, further solidifying Apple’s dominance in the car.

But how does CarPlay stack up to the current crop of infotainment systems? Here’s a breakdown of how Apple’s first real attempt at dashboard dominance competes with the best from the established automakers.

If you haven’t ponied up for a new car, the only way to get smartphone functionality onto your dash is through the aftermarket. 4×4 Shop Canada for Android are both solid solutions to your unconnected-car woes, but to get that functionality you have to rip our your existing system, lose the built-in features, and have an aesthetic sore thumb sticking out of your dash.

One thought on “How Apple’s CarPlay Compares to the Competition”